I wrote the beginning of this while I was pregnant but I wanted to share because it is part of our story. A year ago today we found out I was pregnant and we started celebrating silently until we went to the Dr. to confirm my pregnancy in January. Today he is 4 months old!

Buckle up, grab a coffee, settle in. This one’s a long one!

This has been an odd topic to think about writing but I also would like to have a place that I can look back on because before we know it, Baby Brown will make their debut and the world is going to look a whole lot different. Honestly, while it feels like it’s simultaneously taking forever and flying by, we are excited for this new adventure together.

Here’s a look back on the start to our journey:

It’s 12/30/19 and this morning I took a pregnancy test to ease my worry about my raging attitude for the past few days, my bloatedness and even my sore boobs that also had some swelling. All of these things have happened before though. I wasn’t honestly worried. The month before I had been 7 days late and each test came back negative.

I dipped it and it started spreading and I sighed in relief, the same way I’d sighed many times before until I looked at it again a minute later. Is that a line? Like a second line?! Wait, no way. That’s a freaking second line… I remember being totally dumbstruck for a few moments until I looked in the mirror and smiled to myself. Jeremy and I were not trying to prevent this so it wasn’t the end of the world. We also were not putting any unneeded pressure in ourselves. How am I going to tell Jeremy? I can’t wait until tonight to tell him and I’m sure not texting him later to say, “oh hey, by the way, I’m pregnant.”

I looked up a due date calculator and found that it was predicting September 4th. Which is also significant in our lives because that was his grandpa’s birthday. I decided that I would make my breakfast, take another test to be sure and go upstairs right before Jeremy took his shower. The other test as you may guess was also a double line, in your face, positive.

I crept upstairs and put the tests in our bathroom, brushed my teeth and washed my face. Jeremy was still asleep after all of that so I sat on the edge of the bed and asked him when his alarm was supposed to go off. *to be fair he normally was up by the time I woke him up. He told me he was working from home so I proceeded to tell him, “Well we finally f****d up.” (this was a joke between the two of us, and we actually were never upset by this news) We laid in bed for the next 20 minutes talking about this crazy thing until I had to leave for work.

To say that focusing on the day was hard is a gross understatement. I love my job but I had to make myself do it because finding out right before coming in made it so hard to focus.

After a long day I came home and spent time with Jeremy. I did drop by Target on the way home to grab a shirt I can take pictures in, more prenatals (I had been taking them since the month before since we had a scare), body butter and anti nausea pop drops (these are disgusting) for just in case. We had dinner and I finally realized that I have not been enjoying hot coffee or hot foods. I’m guessing it was a start to food aversions.

I ended up laying on the couch by 7pm and finally went up to bed at 8pm. I was exhausted and tired getting into bed but then woke up about midnight hot and wide awake. I had to go get water and turn on the humidifier because my nose was stuffed up.

I’m more excited now if that’s even possible. Last night when talking to Jeremy I asked if he was excited and he proceeded to show me the goosebumps on his arm while saying yes. It makes it so much better.

I woke up this morning 3 minutes before my alarm so I jumped straight into getting up, straightening my hair and getting ready for work. I’ve found that letting my breakfast sit for a bit is making it easier to eat.

I downloaded the app Ovia and that is fun. It tells you how many days pregnant you are, the symptoms you could be experiencing, the size of your little blip and other random things you might want to know.

I left for work a bit early to grab a cold brew coffee because 1) it’s cold & 2) we start a 2nd round of Whole30 tomorrow so I wanted to indulge. It’s hard knowing what you can and can’t eat. I found out today I can’t have pineapple…like seriously? I’ll give up all the alcohol, cheese and deli meat but pineapple. You better be a cool kid. (And he is)

I had a salad for lunch because again, not loving hot foods.

My coworker suggested that I have a fancy coffee in the afternoon. I’m going to have to get some decaf coffee for the office. 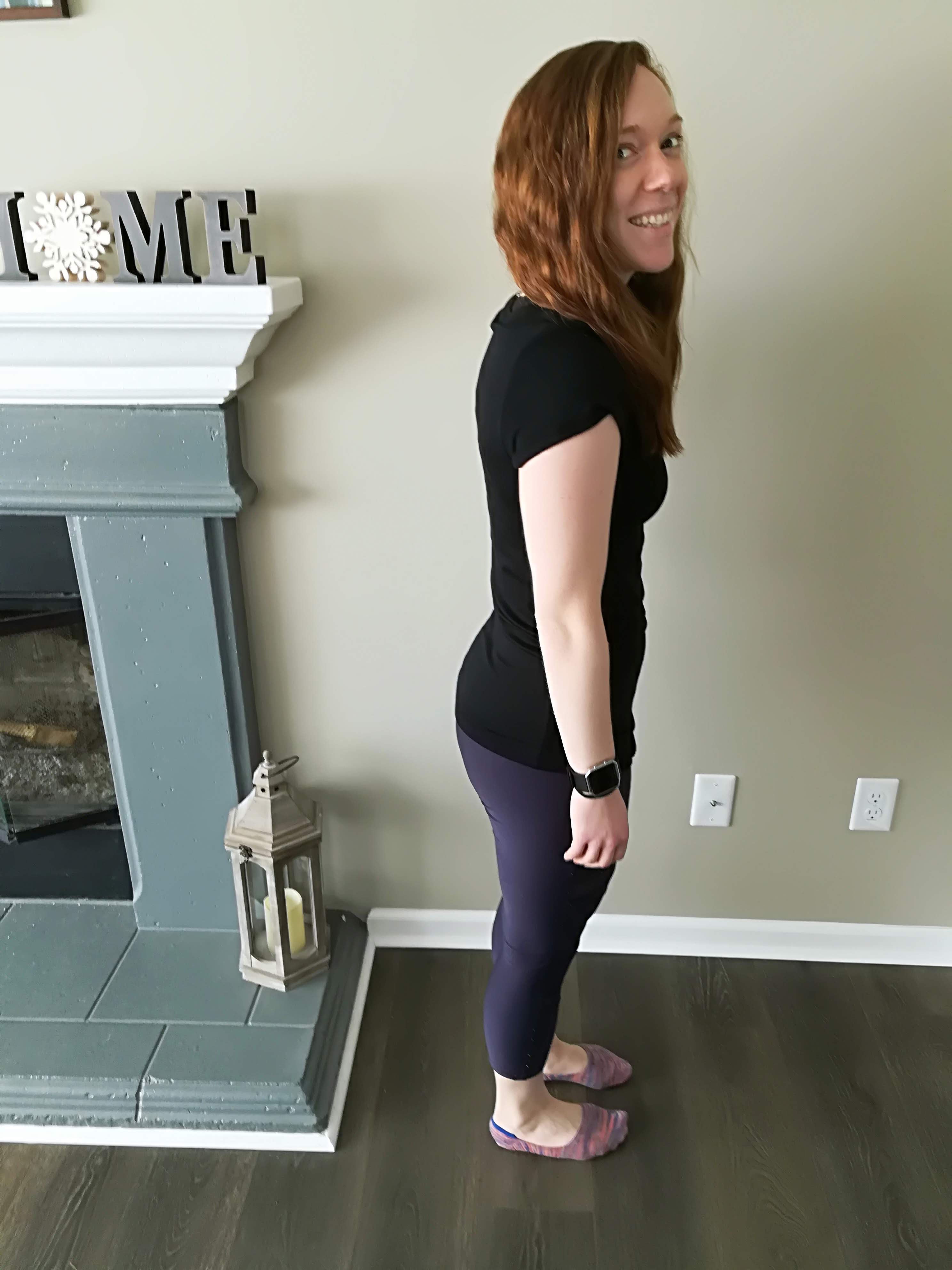 We are a little under a week until we finally get to go to the dr. I will be 7 weeks pregnant next Friday 1/17. I am dying to tell our parents and my coworkers. We are not going to wait until the end of the first trimester but I do want to get it verified by a dr. first.

I never knew what morning sickness was until two days ago and it really hit with a vengeance yesterday right at my 6th week. Apparently it’s normal but I am not loving it. I threw in the Whole30 towel yesterday so that I could put saltine crackers in my stomach and I regret nothing. I made a homemade chicken soup for lunch and that was easy on me too. I’m finding it’s worst in the morning because my stomach is empty but if I snack on tiny things all day I’m better off.

I’m not trying to lose weight but I am down 6lbs. since becoming pregnant.

My emotions were awful too until yesterday and I’m assuming it’s from depriving myself on Whole30. I didn’t feel that way the first time but I was also just doing it for fun and not growing another human. I am now going to embrace the crackers, cereal and toast while I need it.

I’ve also had no regular coffee since new years day which is crazy to me.

The rest of the 1st Trimester:

I ended up not keeping up with the semi-daily check ins but honestly they would have all been the same.

I shared with a couple of my coworkers in the next couple of weeks because I could not function at work without this horrible feeling I was letting people down. Also, I was not eating and they would have soon started questioning me. It helped me to know that they were in my corner when I felt like I couldn’t even get up from my desk. I was so very sick (never actually getting sick) that I struggled the whole way through the first 12+ weeks.

There were many days Jeremy had to listen to me cry about how horrible I felt. I didn’t think at 8,10 or 12 weeks I could go another week feeling the way I did but thankfully the sickness finally subsided and I began to feel like myself again around 14 weeks.

Like I mentioned I didn’t end up keeping up with this. I did take weekly bump pictures and keeping a journal of letters to our baby. 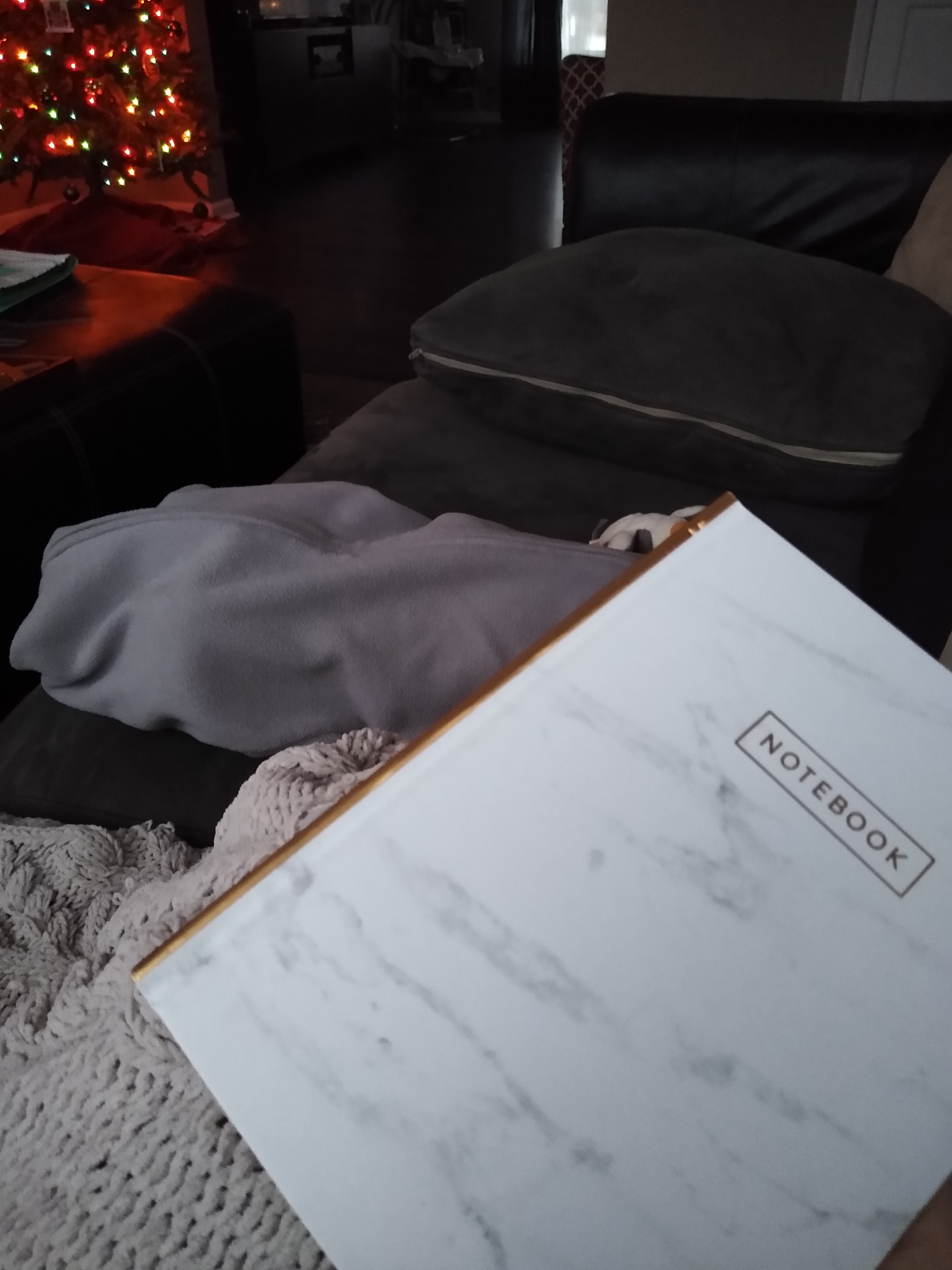 Logan is seriously a little ball of joy. Not only is he happy 99.9% of the time but he brings us so much happiness on the daily. We’ve been so lucky to have the ability to keep him home and safe these past 4 months.

Giggling. Goodness there is not another sound like it. I cried the first time he did it and I can’t wait until he does it each day.

Screeching. It’s mostly adorable unless we need a moment of quiet but I still love it. He’s figuring out his own voice and that he is making the noises.

Standing. Logan no longer wants to just lay or sit. He’s found that standing is where it’s at and he’s even doing it by himself propped against the back of the couch.

Rubbing his eyes when tired. Not going to lie, this is adorable.

We moved Logan to his own room this past Sunday at 17 weeks old. The risk of SIDS is much lower after 4 months as long as you follow the ABCs of safe sleep.

B – on their back

C – in their crib or other safe sleep surface

He is doing really well considering he’s supposed to be hitting a regression soon. The first couple of nights he woke for a middle of the night feeding and I replaced his pacifier once or twice but nothing too far off of him sleeping with us in our room. Last night was a hard one but I can’t blame it on anything yet. We tend to have those once in a while.

Some days he naps well and others he’s not about it. We just follow his cues and roll with it. It’s made the baby thing easier. I read a quote that changed my outlook early on, something about not controlling your baby but controlling your attitude about it.

Logan is still exclusively eating breast milk. He will continue to do so until 6 months or when he shows readiness cues for baby led weaning. Although we may get cleared for infant cereals and purees we will be skipping this step as it is unnecessary and he gets the best nutrition from breast feeding. Again, food before one is just for fun.

Getting his belly or feet tickled, when you sing songs but especially ABCs, his new Xander stuffed animal dog, his play mat, standing, ‘talking’, baths, when you ask him if he can say ‘mama’ or ‘dada’, 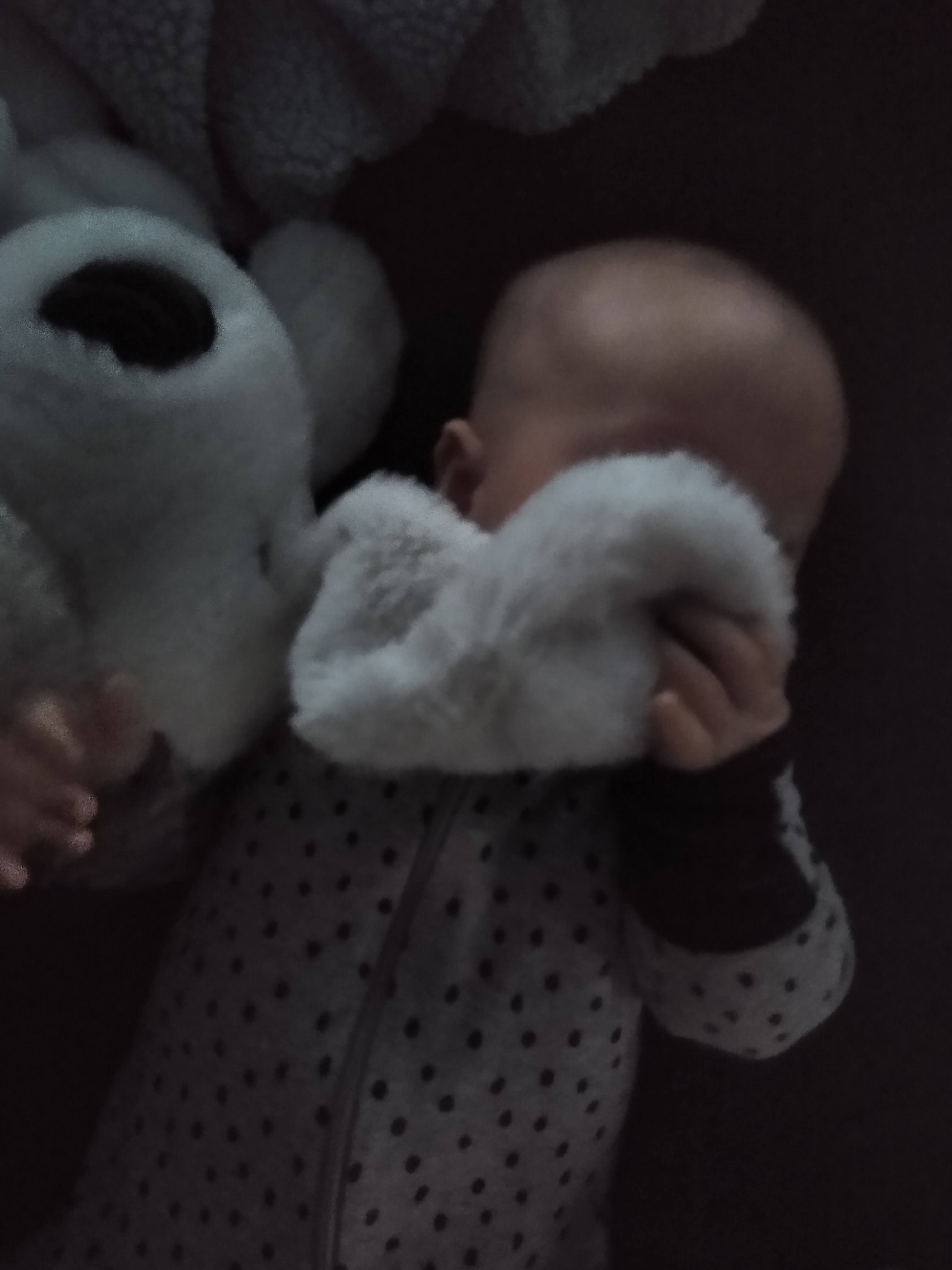 Wind, the Otteroo, naps, practicing rolling and tummy time when he’s not into it.

I’m not sure how it’s already been four months but it also feels like he’s been here forever and I’ve been his mom for the longest time. I love watching him grow and learn and I’m so blessed to do it at home while the world is on fire. I’m hoping he does just as well with his 4 month shots today as his last ones at 2 months.

Also Happy Birthday to my brother!

And congratulations to my sister-in-law who had her son super early this morning! 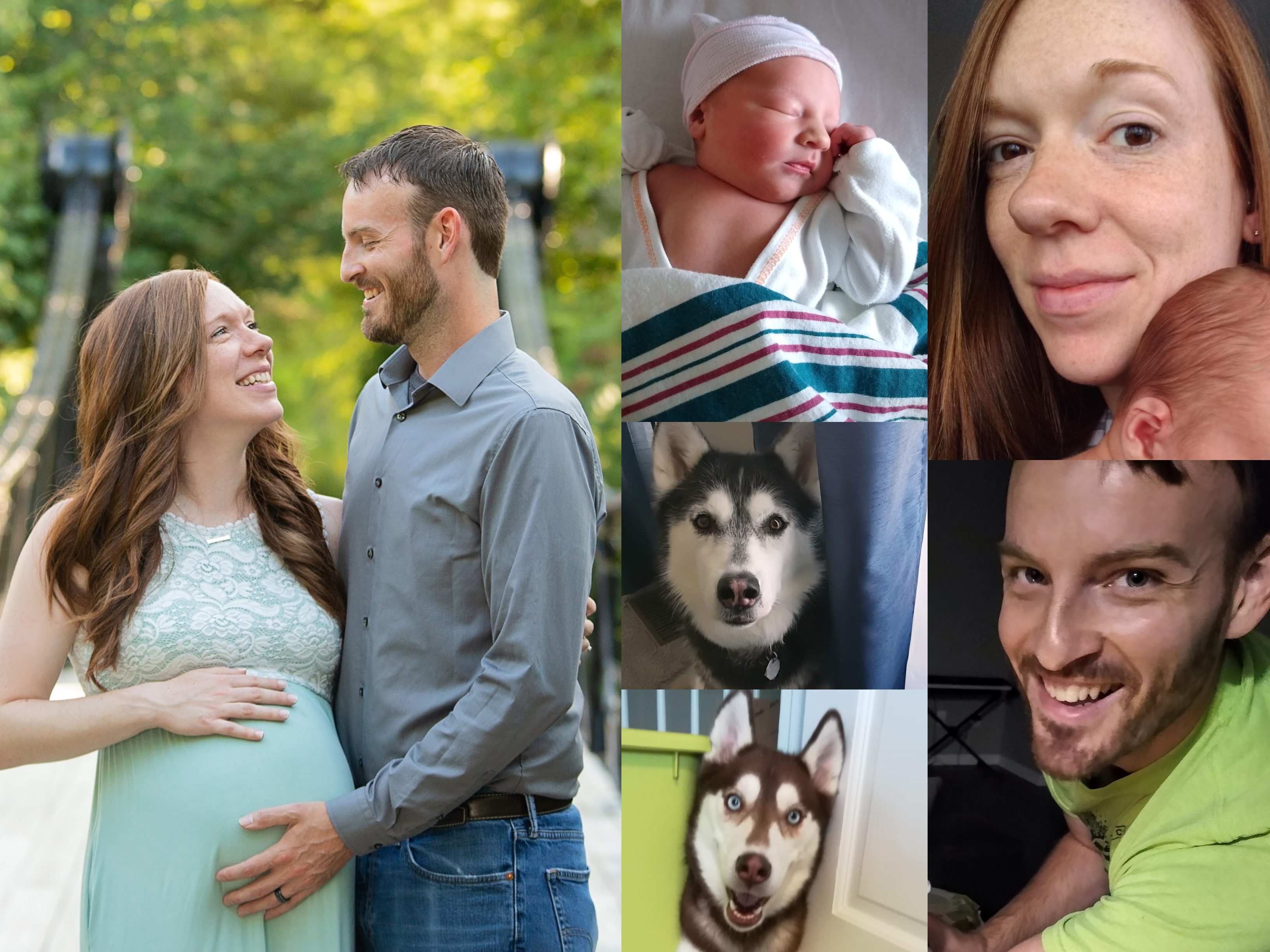